As revolutionary as her plants, Alice Doyle is motivated to find cool plants, support retail nurseries, and ultimately change the way people garden in the West

By Debra Prinzing
This article originally appeared in the Summer 2019 issue of Pacific Horticulture, edited by Lorene Edwards Forkner 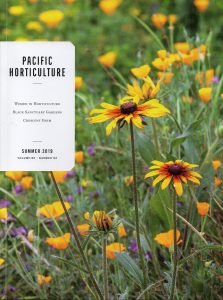 Listening to Alice Doyle recount the origin stories of Log House Plants’ most popular introductions, educational campaigns and innovative collections is a great way to trace the last forty years of horticulture in the West. Her fingerprint is all over each cycle of popularity — from cottage borders to pollinator habitats; from winter gardening and flavor-packed edibles to the ‘Mighty Mato’ grafted tomato.

As one-half of Log House Plants, which she co-founded with partner Greg Lee in 1976, Alice is a true botanical force, propelled by an inner drive to find new plants and share them with the rest of us. She is innately curious about the plant world, and by world, I mean that Alice takes research to the extreme and along the way creates meaningful partnerships with similarly-minded plant people around the globe. Back in the day, she nurtured seed-swapping pen pals in Europe and Asia, who she calls “my network of people who speak the language of plants all over the world.”

As technology improved her ability to plant-hunt, letter-writing gave way to fax machines and email correspondence took over. Travel also factored in the mix, with expeditions to places like Germany and India, as Alice sought, evaluated and asked, “how can I bring this plant to my customers?” Clearly, Alice’s hunger to discover edibles and ornamentals that can energize independent garden centers (and their staff and customers) is voracious. 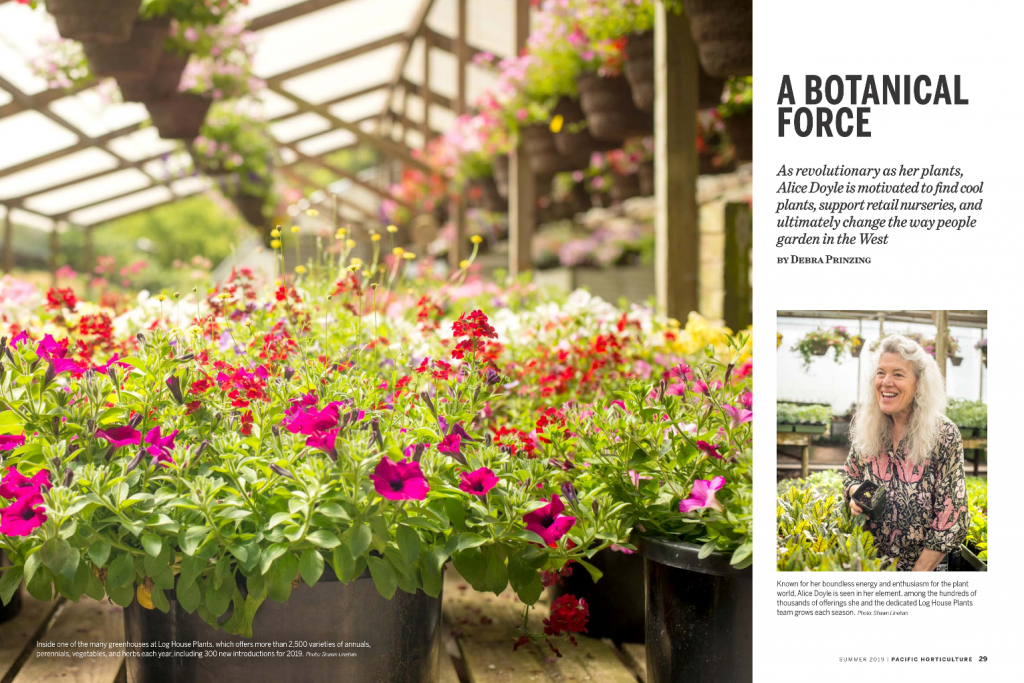 With a contagious smile and a head of long, salt-and-pepper hair that’s always flying, Alice is an energetic presence who rejects the term “marketer,” opting instead to be described as an “educator.” Through Log House, she has greatly influenced what home gardeners plant in their backyards or containers, but she does so by bolstering her direct consumer: Indie garden centers and nurseries that dot the I-5 corridor from Southern California to the Washington-British Columbia border, as well as inland hubs in all three Pacific Coast states.

Alice is the acknowledged “front person,” while her partner Greg manages production. The duo found their 50-acre farm with yes, a circa 1929 log house, right after graduating from University of Oregon. They worked outside jobs while building the first greenhouses, Greg as a VW mechanic, Alice as a public elementary school teacher, and soon, their young plant business took off.

Alice’s friend for 30 years, famed garden writer Ann Lovejoy, often helps with Log House writing projects and shares with Alice a mutual “geek gene” when it comes to plant discovery. “Alice is omnivorously interested in plants,” Ann says. “She is a pioneer, a seeker, and an educator. She’s essentially an explorer.”

Clearly, Alice understands how home gardeners operate, citing garlic starts as an example. “We kept forgetting to plant our garlic crop in the fall and we realized that other people had the same situation,” she explains. “So we collected all these unusual flavors of garlic . . . and grew them so that in February, retailers could offer our four-inch pots of garlic that were started on time.”

Similarly, Log House transformed how perennials are marketed, offering four-inch, rather than one-gallon plants, and creating a color-keyed labeling program to indicate the bloom time. “You could go to any nursery that we sold to and it looked like a rainbow of perennial blooms with seven different label colors for each of the periods,” she says. The program fueled a “continuous color” craze in perennial gardening, catching the eye of Sunset’s Jim McCausland, who wrote about Log House’s “Oregon Bloom Time” manual in the early 1980s. “We ended up doing four printings and selling 15,000 copies of the booklet,” Alice recalls. At $3.95 each, it was a low-tech sensation, pre-dating the plethora of information now available to the trade and consumers alike at loghouseplants.com.

Today, Log House maintains a catalog of about 2,500 varieties of annuals, perennials, vegetables and herbs, with almost 300 new introductions for 2019.

“When we started, no one was growing anything except for marigolds, impatiens, lobelia and alyssum and very few vegetables,” Alice recalls. “The nursery trade was just barely beyond ‘digger flats.'” Most retail garden centers also wrapped up “the season” by late spring, leaving their tables and shelves bare through summertime.

Log House built its first marketing campaign in 1977 around fall and winter vegetables with input from Binda Colbrook, author of Winter Gardening, and Steve Solomon of Territorial Seeds. “At the time, we didn’t own a copy machine, so I went down to the copy shop in Cottage Grove and made these color-coded paper signs to staple on the end of each wooden flat. At Greg’s encouragement, we were the first to use color-coded plastic labels. They read: Fall Harvest, Winter Harvest and Continuous Harvest. Our retailers loved it because they had something to sell after the first week in June through early September.”

Today, with the fear that big boxes are making gardening homogenous, knowing that Alice Doyle is on the job is reassuring. “The reason we started growing unusual plants is not purely for our own joy (which is the main reason), but to give independent retailers something that’s different than the chain stores,” she says. There was a time when grocery giant Fred Meyer bought from the Log House catalog and hired Master Gardeners to manage its garden centers, but that time has passed.

Alice takes these changes in stride, still staying ahead of the marketplace by spotting trends and understanding how gardening lifestyles are transforming. “Our mission is to support independent retailers. We look for unmet need or an unfilled commercial opportunity, find wonderful people who are growing unusual and suitable plants, assemble both practical and historical information, then grow the plants. We create special labels and point of purchase materials to entice and engage gardeners through stories and dreams of what’s to come.”

Creating sizzle in the press, though the introduction of plant collections, pays off.  “We have waves of plants, waves of projects coming on. We’ve done three or four unusual projects every year we’ve been in business,” she says. One of her favorites, called “Butterfly Bed and Breakfast,” was introduced in the mid-90s well before the current pollinator gardening craze. “We brought it back every five years and now we offer it every year because it’s caught on so well.” The “Mosquito Plant Collection” was inspired by ethnobotany research funded by the Bill and Melinda Gates Foundation. The Drunken Botanist collection coincided with New York Times’ bestselling author Amy Stewart’s book by the same name — offering plants (and recipes) for botanical cocktails.

Alice also is part of the Culinary Breeding Network, working with several universities to find new flavors in vegetables (beef-and-onion-flavored sprouts from a Chinese mahogany tree, anyone?).

Bob Lilly, Seattle-based horticulturist and coauthor of Perennials, has been part of the Alice Doyle orbit for decades. Their friendship began when Bob was a Log House customer, which led to their many plant-hunting trips. “We share a passion for new and interesting plants. She is dogged and has the ability to maintain a one-track mind while doing a thousand other things,” Bob says. “I think Alice is probably best as a bridge between the larger aspect of the horticulture business and retailers and their customers. Her magic really works at the independent nursery.”

When Alice understood the potential of grafted vegetables, she helped to redefine edible gardening for gardeners not just in the west but across the country. Grafted vegetables first introduced to Log House customers in 2010 were almost immediately marketed in 2011 through a national program from SuperNaturals Grafted Vegetables LLC, a partnership between Log House, John Bagnasco and Tim Wada. SuperNaturals licenses the grower Plug Connection of Vista, California, to graft and offer liners of their Mighty ‘Mato and other grafted brands to wholesale growers nationally. When their latest introduction, the ‘Ketchup-N-Fries’ plant (a tomato-potato grafted plant), gets a mention on Good Morning America and is marveled at by late-night host Stephen Colbert, it’s clear they hit a horticultural home run.

Alice’s passion has created a plant-lovers’ vortex that leads to relationships at all levels of the botanical continuum — from seed companies and breeders, to plug labs and wholesalers, to retailers and home gardeners. “Early on, we realized that the way to capture our customers was by telling stories (true ones) and selling dreams,” Alice says. “When we shared our own passion and delight with the enchanting, captivating world of plants, gardeners responded with enormous, exciting enthusiasm. For us, the key really is excitement; if we LOVE a project, we can sell it well. We have found our joy in coming up with new ideas and new crops and showcasing them.”

Download a PDF of Alice Doyle: A Botanical Force here

An Eco-Chic Floral and Fashion Collaboration

Review: Color In and Out of the Garden 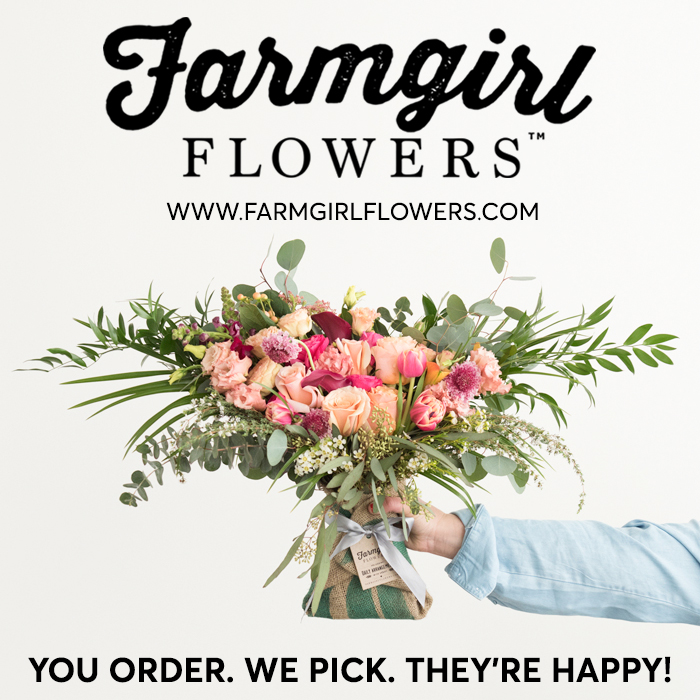