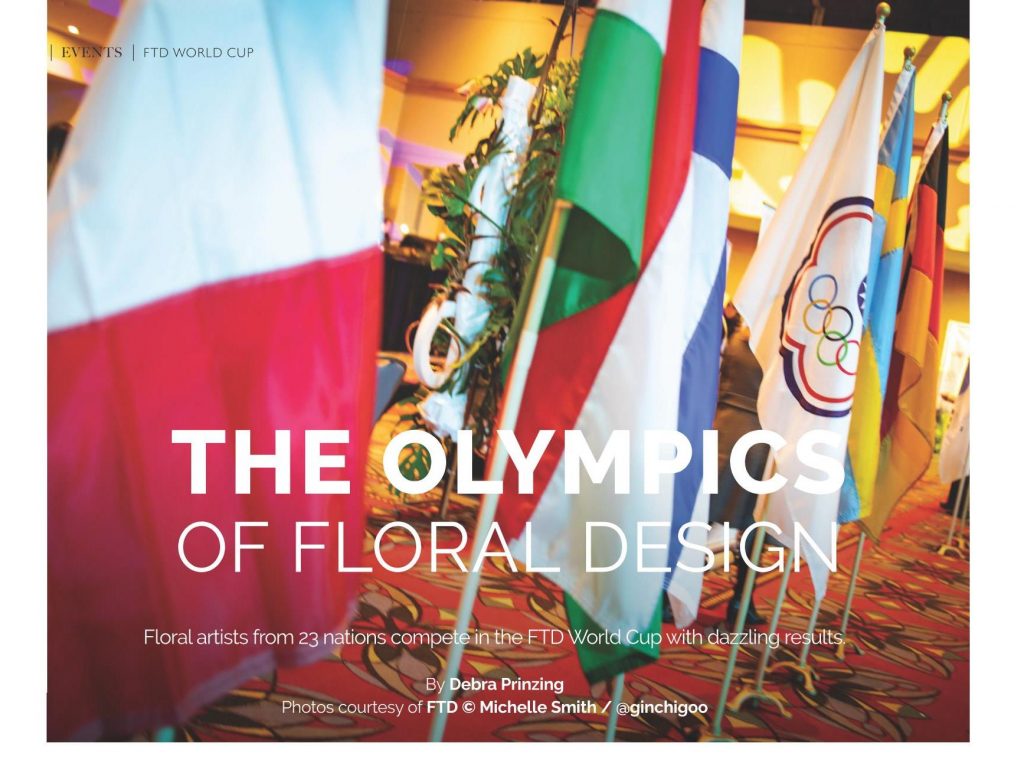 The Olympics have always been a big deal in my house. We get hyped up about the track and field events, and every four years my husband travels with his college track buddies to attend the Olympics in person, cheering for world-class athletes as they vie for the gold. Now that I’ve witnessed the floral community’s own version of the Olympics, I am equally charged up.

There are so many superlatives I could draw out of my writer’s bag of adjectives to describe the event. Suffice it to say that the Interflora World Cup, held March 1-3, 2019, at the Philadelphia Flower Show, was a mind-blowing experience.

The floral profession’s top prestigious event, held on the global stage, Interflora World Cup showcases the most talented floral designers in the world. The international floral competition is held approximately every four to six years, hosted in a different location each time.

In March, Florists’ Transworld Delivery (FTD) hosted the world-class competition for the first time in the U.S. since 1985 when it took place in Detroit. This year’s competition, named FTD World Cup 2019 in recognition of the event’s host organization, included representatives from 23 countries.

“It is said to be the Olympics of Floral Design and regarded as a career-defining competition, since the winner is extremely sought after for demonstrations, presentations and workshops throughout the world,” says Emily Bucholz, director of marketing communications, FTD Florist Division. “The FTD team has had a great sense of pride being able to bring the World Cup competition back to the U.S. for the first time in 30 years. Our goal was to unite the international floral community in our great nation, but also introduce our North American florists to the incredible floral design talent throughout the world.”

Over three days, on a public stage witnessed by the floral community and flower show-goers, competitors produced the profession’s best expression of their craft, each one a national winner in his or her own right. Their level of floral artistry, precise execution of technique and highly personal interpretation of each challenge was a delight to watch.
Australia’s Bart Hassam was named the 2019 World Cup Champion at the conclusion of the three-competition filled with five distinct design challenges.

Hassam, a resident of Brisbane, Australia, is a professional floral designer and active floristry competitor. He has won the Interflora Australia Florist of the Year Competition five times and the 2011 Intercontinental Asia Cup. He exhibits, demonstrates and teaches floral design around the world.

Competition aside, the community spirit infused the entire experience. After winning, Hassan said that one of his favorite moments about competing in the World Cup was spending time with other floral designers from all over the world. “Some of them are already friends and now I’ve made new friends, too. It’s always interesting to see how they work with flowers – and how they are as people, too.”

Each floral designer completed four preliminary design tasks, followed by a semi-final round featuring ten competitors. The five finalists created their final design task live on stage at a gala event with 650 guests. Hassam was named champion at the conclusion of the evening alongside first runner-up Natalia Zhizhko from Russia and second runner-up Tamás Mezöffy from Hungary.

As a World Cup competitor, the experience is unforgettable, Zhizhko says. “My favorite memories about competing are the beginning and final moments of designing each task,” she explains. “At first, there is the moment when you are fully concentrated — the moment that you have prepared yourself for a few months when one invents and experiments as a designer, looking for solutions and choosing flowers. And then, there are those few second when you inhale, exhale and start working. Suddenly, it seems, there is a final countdown — three, two, one — and you see your work complete.”

Covering the World Cup for Florists’ Review gave me a front row seat to watch each of the competitors as they created such unique and inventive floral pieces.

Read on to gain insights from floral leaders and participants (see download link for full article at end of post): 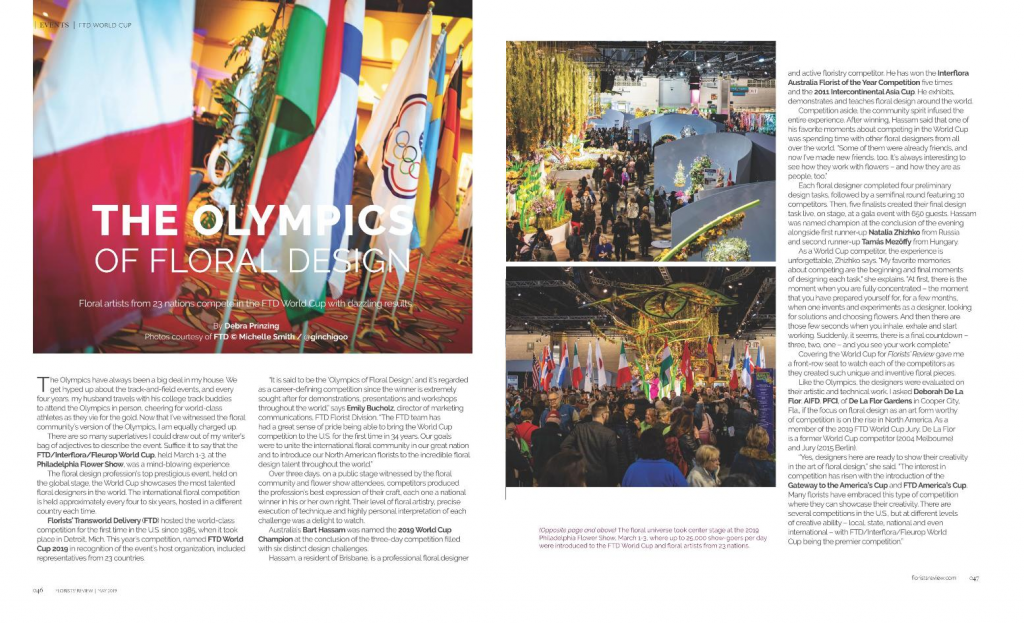 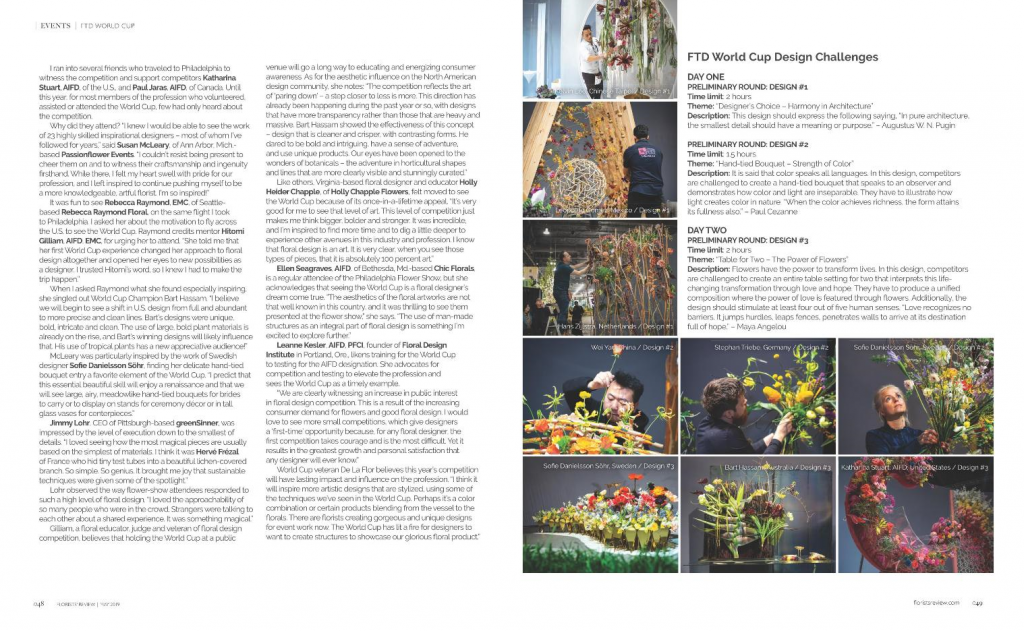 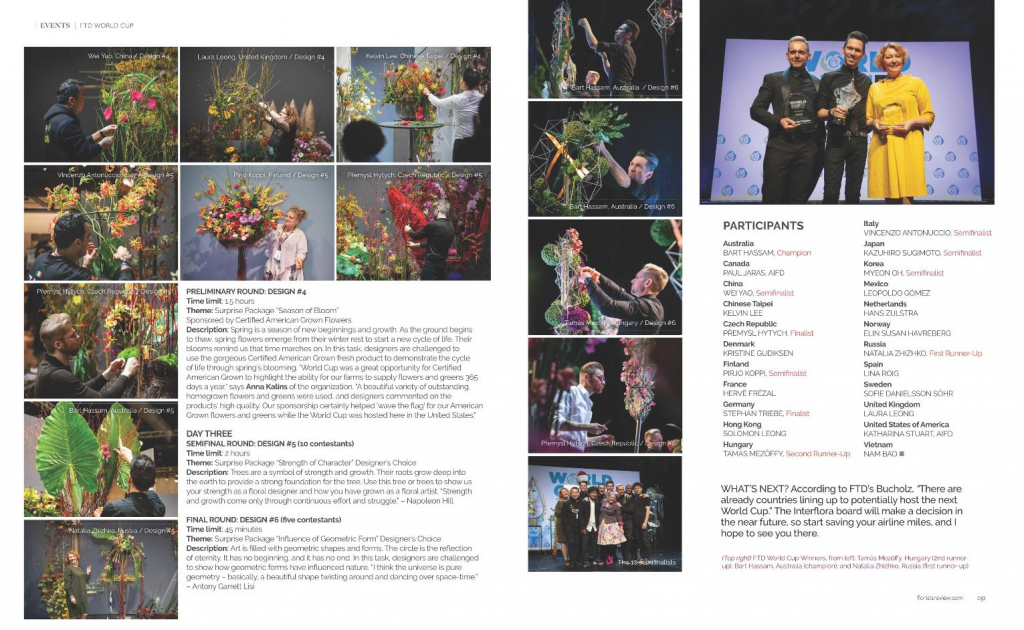