This national award recognizes individuals and companies who achieve the highest levels of talent and professionalism in garden communications. The 2016 competition had more than 250 entries in 56 categories. Recipients of the Silver Medal represent the top 10 percent of each competition category and will now compete for best of group in the areas of writing, photography, electronic media, publishing and trade.
Prinzing received the Silver Medal of Achievement for her groundbreaking online project, Slowflowers.com, the nationwide directory to farms, florists, shops and studios that design with Americangrown flowers. This is Prinzing’s fourth Silver Medal from GWA and she also received the Gold Medal for best book in 2009.
“The GWA Media Awards showcase the writers, photographers, editors, publishers and trade companies that have pursued excellence in gardening communication in print or electronic communications,” says Kirk Brown, president of GWA. “The Media Award winners have been judged by industry experts and show significant distinction and merits that exemplify exceptional work.”
Slowflowers.com was launched in 2014 after a successful Indiegogo crowd-funding campaign that raised more than $18,000 for development of the database platform and public relations efforts. Ongoing promotion, marketing and media outreach generates 4,000 unique visitors and 21,000 unique page views per month. Slowflowers.com features 700-plus floral businesses (flower farms and florists) in the U.S. and now in Canada.
Since the early 1980s, the GWA Media Awards program has recognized outstanding writing, photography, graphic design and illustration for books, newspaper stories, magazine articles and other works focused on gardening. In recent years, the awards program has expanded to include on-air talent, production and direction for radio, television, video, Internet and other electronic media.

A Day on the U-Pick Flower Farm 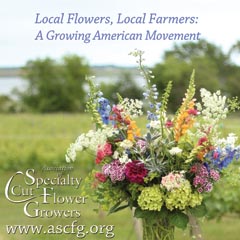